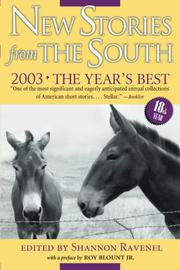 NEW STORIES FROM THE SOUTH

Editor Ravenel has cast her net widely and well, making the 18th installment of this deservedly successful series one of its best yet.

Only a handful of the contributors have familiar names, and two of them appear here in peak form. John Dufresne’s “Johnny Too Bad” is a hilarious monologue spoken by a transplanted New Englander and would-be writer experiencing a Florida hurricane alongside his brainy, voluptuous girlfriend Annick and “chronically aggressive” dog Spot. Now that Dufresne has moved south, FFW (Florida’s Funniest Writer) Carl Hiaasen will need to look to his laurels. Equally impressive is Dorothy Allison’s “Compassion,” whose narrator’s unflinching description of her beloved “Mama’s” death from cancer blossoms into a rich orchestration of family contention, closeness, and pride. A somewhat similar story, Donald Hays’s “Dying Light,” depicts the subtly changing relationships among another moribund cancer victim, his frail devoted wife, and their unhappily married, underachieving adult son. Embattled relationships also figure in Michael Knight’s “Ellen’s Book,” which is and isn’t about “a dead baby haunting his father,” and Latha Viswanathan’s breezy portrayal of an Indian matchmaker operating out of Houston via the Internet (“Cool Wedding”). Several stories accomplish what Steve Almond declares the objective of his own fine, wild story of alleged alien visitation, “The Soul Molecule”: “to find a note of grace in the incontrovertibly strange.” Best are Brock Clarke’s Barthelmian fantasy about a victim of divorce who consoles himself by buying the city of Savannah (“For Those of Us Who Need Such Things”) and Ingrid Hill’s literally miraculous tale of a maimed Vietnam vet’s fortuitous collision with stoical black healer “Mother Peaches” (“The Ballad of Rappy Valcour”). And if traditional stories are your thing, don’t miss Paul Prather’s loving depiction of a group of elderly women who shepherd a rundown church through its inevitable demise (“The Faithful”).

Both the familiar and the strange are eloquently evoked and celebrated here: a model anthology.