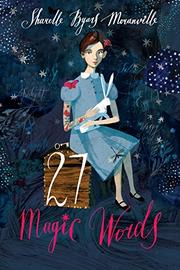 Kobi’s world is vividly portrayed, shimmering with just a soupçon of subtle magic from the opening pages.

Ever since her mother wrote 27 commonplace but seemingly magical words on some Post-its, the white 10-year-old has used them both to make life go smoothly and, more importantly, to connect her to her missing parents. Whenever she says the most important—“Avanti!”—she can watch them on their island refuge. But is Kobi’s magic real or just her increasingly ragged defense mechanism for fending off the grim reality that her beloved parents, lost at sea, will never be coming back? Moranville neatly sustains the ambiguity, letting Kobi gradually discover the limits of her enchantment as well as its enduring basis. It is only after she and her older sister, Brook, both previously home-schooled in Paris, move in with their genial half uncle and begin attending school that Kobi’s magic falters. Bullying and her own unfolding maturity leave her exposed to truths she’s previously ignored. Brook, too, is struggling, keeping herself safe only through complicated obsessive-compulsive behaviors that turn out to be intimately connected with Kobi’s magic. Distinctive, well-drawn characters drive the plot and provide their own magical contributions to Kobi’s widening world.

Both tragic and uplifting, this winsome tale perfectly depicts some of the many aspects of magic.