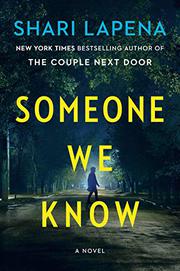 Sixteen-year-old Raleigh Sharpe has been breaking into homes and hacking into computers to send prank emails. His father, Paul, is keen to minimize, or avoid altogether, any legal fallout, but mom Olivia feels terrible and is convinced that, at the very least, an apology is in order. Without consulting Paul or Raleigh, Olivia writes anonymous apology letters and delivers them to homes that Raleigh targeted. When the bludgeoned body of Amanda Pierce is discovered in the trunk of a submerged vehicle, the neighborhood comes under scrutiny. After all, two weeks ago, Amanda’s husband, Robert, reported her missing after she didn’t return from a girls’ weekend, and now he’s a prime suspect in her death. His is also one of the homes that Raleigh broke into, and of course Raleigh left his fingerprints all over the place. It’s quickly revealed that Robert, an attorney, is hiding something, or a lot of somethings. He’s been sleeping with his next-door neighbor Becky, whose husband, Larry, was having an affair with Amanda. Amanda was young, beautiful, inspired seething jealousy from the other wives, and had a reputation for promiscuity, as pretty murdered women so often do. It’s an adultery merry-go-round in Aylesford, New York, and Detectives Webb and Moen (no first names and minimal personalities) have their hands full with this lively bunch. Lots of wagging mouths spreading salacious rumors set up a few nicely placed red herrings, and Olivia’s efforts, with the help of her friend Glenda, to keep poor coddled Raleigh out of the long arms of the law add angst. Unfortunately, Lapena doesn’t give readers any meaty characters to sink their teeth into or even really root for, and readers will likely see the big twist coming a mile away.

Give this toothless suburban thriller a pass.