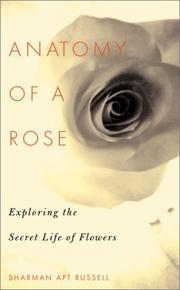 ANATOMY OF A ROSE

Exploring the Secret Life of Flowers

Twelve poetic essays in which a nature writer draws on botanical research, theories of evolution, and her own emotional experiences to explore the roles flowers play in our lives.

Throughout this poetic meditation, Russell (When the Land Was Young, 1996, etc.) maintains that people need blossoms for both ecological survival and personal well-being. She eroticizes the physical features of flowers throughout (speaking, in one vivid passage, of how “pansies wait expectantly, their vulviform faces lifted to the sky”), and these impassioned descriptions, reminiscent of Georgia O’Keeffe’s paintings, may offer some amusement to botanists while enlightening amateur gardeners. There are descriptions of flowers’ complex romances with their pollinators that reveal how both blossoms and bugs have evolved to accommodate each other. We are even introduced to various species of fleurs fatales whose seductive charm lures naïve pollinators to their deaths—including a hermaphroditic water lily that, during its female stage, murders the trusting hoverflies it once fed. While Russell cites Charles Darwin and other famed biologists, her lyrical ruminations do not provide new insight into biological evolution. Still, her unique interpretations of natural selection provide some dramatic scenes, for example, when bumblebee thieves attack flowers for nectar. More personal stories of Russell’s friends dashing home to view the rare blossoming of their cereus cacti and accounts of prehistoric humans burying their loved ones with flowers support the author’s claim that all people have an intrinsic fascination with flowers. But her argument for the protection of endangered species, although valid, is flimsy in comparison to authoritative studies, like David S. Wilcove’s The Condor's Shadow (2000).