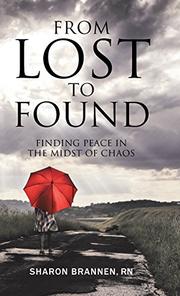 FROM LOST TO FOUND

A debut memoir follows a transformation from addiction to acceptance and faith.

Brannen writes that she always had a difficult relationship with her mother, but five weeks after her mother’s death, she felt moved to commit their stories to the page. She tells of the religious process behind her book, including casual conversations with God, as well as the intriguing tale of her life. Born fourth in a family of eight girls, Brannen had a tough childhood, she says, including early sexual abuse by an unnamed, local “twenty-something.” This produced a tough young girl who would beat up other kids who made fun of one of her sisters. Meanwhile, her mother sowed discontent between her daughters; Brannen also notes that “There are very few memories of my mother that don’t involve men—men who were not my father.” She explores the idea that both she and her mother shared a pattern of sex and addiction as adults. For Brannen, that meant a post-high-school life of “Drug busts, drug deals gone bad, DWIs, lost jobs, wrecked cars, evictions, convictions, barroom brawls, and so much more.” She eventually settled down and had two sons, both of whom were diagnosed with bipolar disorder. But it was the experience of seeing her mother die from ALS, she says, that finally pushed her to write this book and embrace God’s plans for her life. Brannen offers some very compelling material as she looks back on her and her sisters’ childhoods, finally understanding the adult problems that ripped through their lives. She counterbalances these dark subjects with a positive style and quirky perspective, often chatting directly with God and injecting humor into the narrative where she can. At times, however, things can feel too lighthearted; for example, believing a bird is your mother’s spirit stretches the limits of what many religious readers would consider “miraculous,” but Brannen maintains a positive, affirming voice throughout. For instance, when she thinks that acquaintances might consider her “crazy” for talking to birds, she says, “Maybe I was, but who cares? It made me happy, and that was what mattered.”

A Christian remembrance with engaging family dynamics and an unusual voice.

FROM FAITH TO FAITH
by M. Lyn Walker
Newsletter sign-up