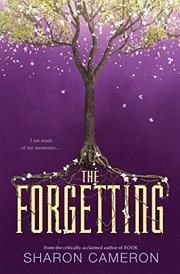 Every 12 years, the people of Canaan lose their memories and must reconstitute identity and relationships from books recording their personal histories—but with her memory secretly intact, Nadia dreads the chaos and violence the imminent Forgetting will bring.

Last time, Nadia saw her father replace his family’s books with fakes, leaving her mother to raise three daughters alone. Their residual unease has led her mother and older sister to reject Nadia, now 18; only little Genivee accepts her as family. Isolated by what she knows and can’t tell, Nadia’s become a silent—but observant—loner. She’s witnessed floggings and the plight of the Lost: those who’ve awakened without books, nameless, forced into servitude, penned into fenced quarters at night. She’s alarmed at Jonathan’s growing power within the governing Council. When handsome, sociable Gray, the glassblower’s son, discovers she forages outside city walls, he blackmails her into taking him along. Smarter and tougher than she’d thought, he becomes an ally and friend—but Gray has secrets too. Effective worldbuilding and strong characterization (even minor players have emotional depth) add substance to the fast-paced plot. A cosmetic resemblance to blockbuster teen dystopias allows Cameron to toy slyly with readers’ expectations, but this is no retread. The Forgetting ensures racial categories have no meaning, but characters do display differences in skin and hair color (Nadia is blonde with light eyes).

A well-crafted fable for our time: as we focus on filling the plate in front of us, we risk forgetting where it came from, what it cost, and what that means.