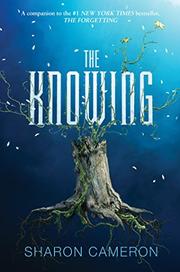 Nearly 400 years after the events in The Forgetting (2016), Canaan, long abandoned, its whereabouts lost, has devolved into an evil myth, while New Canaan, the rigid, class-stratified community that’s replaced it, faces growing threats, internal and external.

New Canaan’s rulers, the Knowing, live underground and are served by Outsiders, impoverished surface dwellers. The Knowing have perfect memory; to recall is to re-experience events as if for the first time. For those like black-haired, brown-skinned Samara who are unable to “cache,” or repress traumatic memories, suicide is common. Secretly helping Outsiders, Samara may have unintentionally endangered them. Tortured by horrific memories, she escapes to find Canaan’s ruins and to Forget. There, she runs into Beckett and Jill, two Americans from Earth’s spaceship Centauri III, its mission to learn the fate of predecessor missions. Beckett, multiracial (Chinese/Latinx) son of two anthropologists, is intrigued by Samara, who talks them into returning to New Canaan with her. His growing chemistry with Samara angers Jill, the bright, blonde, white daughter of an archaeologist. Uneasy with Jill’s ambition and expectations, Beckett’s alarmed by his father’s warning that Centauri III has a secret agenda, one that Jill may share. New Canaan, too, has surprises in store, including a burgeoning rebellion. Diverse, well-drawn characters abound, but in the riveting power struggles that ensue, women are dominant players, ruthless ideologues willing to sacrifice all that interferes with the goal.

The intricately woven narrative threads come together in a suspenseful denouement sure to leave readers hoping for another installment.