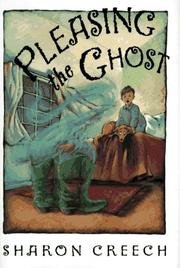 For readers younger than the audience for Creech's other novels (Absolutely Normal Chaos, 1995, etc.), an entertaining story with modest aspirations. Dennis, whose father recently died, is visited by the ghost of Uncle Arvie, who wants Dennis to perform three tasks for him. As the result of a stroke Uncle Arvie suffered while he was alive, he can only communicate in a system of nonsense words—``yin'' for yes, ``pepperoni'' as the name of Dennis's father (Uncle Arvie's brother), ``Heartfoot'' for Uncle Arvie's wife, etc.—that will tax readers as it leads Dennis, eventually, to a lost letter, lost painting, and buried treasure for his aunt. This featherweight fantasy is mildly amusing, but those who have experienced the death of a parent may be pained by Dennis's hope, portrayed as a perfectly reasonable wish, that his father's ghost will visit him soon. Black-and-white chapter decorations further lighten the fare. (Fiction. 8-12)