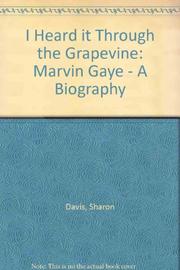 I HEARD IT THROUGH THE GRAPEVINE

Research at depth and previously unpublished revelations make this adroitly told biography of soul-singer Marvin Gaye hard to put down. Despite Gaye's international fame, only a 1974 roman Ö clef about the Motown years (Elaine Jesmer's Number One With a Bullet) and friend David Ritz's Divided Soul (1985) describe his extraordinary life—or death. As British writer Davis (Motown, the History—not reviewed) explains here, when Gaye, 44, was shot and killed by his father on April 1, 1984, his fans were astounded. The singer's friends, however, knowing the violence that cocaine had created in Gaye, weren't surprised when the killer was found to have acted in self-defense. Singing at age three in his father's church, Gaye by age 20 had joined fledgling Motown as a singer and songwriter, penning hits for the Marvelettes and Martha and the Vandellas—here described, along with other singers, studio musicians, and Motown powerhouses, in authoritative and fascinating detail. Despite selling millions of R&B records, Gaye chafed at his straitjacket of love- and dance- songs. Finally telling Motown owner Berry Gordy in 1972 that he would never again record for him if he couldn't have artistic freedom, Gaye wrote, sang, played on, and produced What's Going On?—a seminal album for all R&B artists, one on which Gaye finally wrenched himself off the Motown bubble-gum assembly line and delivered songs about Vietnam, ecology, the black ghetto, and his own drug habit, which was progressively taking over his life. Probably in reaction to lifelong depression, Davis says, Gaye was a 20-year coke addict, often locking himself up alone for monthlong freebase binges. Davis iterates in depth Gaye's many deep contradictions—e.g., how, as a lover, he oscillated from terror that he could never live up to his reputation to a grandiose erotic braggadocio. Consummate biography of a troubled, compelling, and all-too- human character. (Thirteen b&w photographs.)