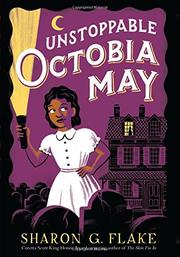 With elegant prose and a spunky narrator, Flake’s latest offers detailed snapshots of African-American life in 1953.

“Death does not look like people think it should. Sometimes it wears summer suits and fine hats, silk gloves, and handmade shoes. Like him.” The “him” Octobia May refers to is Mr. Davenport, a boarder in her aunt Shuma’s rooming house that she believes is a vampire. With the help of her best friend, Jonah, Octobia May stalks the man, telling everyone of her suspicions. It is a unique perspective, depicting a character of color during the 1950s who is more enraptured of horror-movie prototypes than anything else. But Octobia May’s passion begins to feel like compulsion, then obsession. When she insists that she sees what others cannot, she becomes an unreliable narrator—and one who sounds desperate. Then later, when the book shifts from vampires and talking to the dead to Octobia May’s desire to become a detective, the plot feels crowded and loses its emotional resonance. Flake’s incorporation of the social and political milestones of the era makes the story a veritable compendium. From Masons to McCarthy to Pall Malls, Camels and Lucky Strikes, the tale offers an intriguing insight into an important time in U.S. history. However, jarring transitions and a narrator who at times feels emotionally disconnected ultimately leave readers wanting.

Immersive and witty, it illuminates as a historical piece yet falters when connecting the snapshots into a cohesive picture