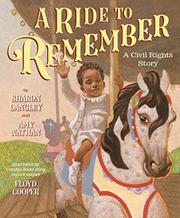 A RIDE TO REMEMBER

Sharon Langley became the first African American child to legally ride the carousel at Gwynn Oak Amusement Park in Baltimore, Maryland, one month before her first birthday, in 1963.

Her ride on the carousel followed a series of protests and the arrests of many, including children, who demanded the park integrate. The story is told through a conversational reminiscence between a school-age Sharon and her parents, interspersed with moments when Langley speaks to readers as an adult. The questions the little girl poses to her parents are those one would expect from a child grappling with injustice: “What about the Golden Rule? What about treating other people the way you want to be treated?” Her mother tenderly answers her innocent yet complicated questions with kindness and grace: “I guess some people forgot that the Golden Rule is supposed to include everyone.” Braided into the story are mentions of the other children who participated in the protests for the integration of the park. Backmatter includes photographs and a note from Langley, a timeline, and updates about the people mentioned in the story. Cooper’s grainy sepia and golden tones with bright bursts of color give the book a dreamy and nostalgic quality that fits well with the story.

This book delivers a beautiful and tender message about equality from the very first page. (Picture book/memoir. 6-9)