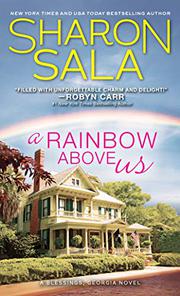 A RAINBOW ABOVE US

A construction company owner returns home and finds love with a hurricane refugee.

The Boone and James families of Blessings, Georgia, have been feuding for generations. As a teenager, Bowie James and his mother were forced to flee town, and he vowed never to return. Years later, a hurricane destroys his grandmother's home, and his family begs him to help rebuild. Bowie is surprised to find Rowan Harper, a young woman who lost her father in the storm, living with his aunt and grandmother in an emergency shelter. Refusing to leave any of “his girls” behind, he takes all three to live in his mobile home while his crew restores the destroyed house. When Bowie’s return unveils years of shameful Boone family secrets, he prepares himself for their inevitable retaliation, which starts with physical assault and escalates to gunplay. Sala (Forever My Hero, 2019, etc.) gives extensive narrative time to everyone in the Boone family, including the angry patriarch, the duped wives, the incompetent middle-aged sons, and the confused teenage grandson. This is notable only because Rowan, Bowie’s love interest and the heroine of the book, is a complete cipher. Rowan graduated from high school, but there is no hint of her life in the intervening seven years. She lived on a farm with her controlling father and didn’t go to school, have a job, or dream of her future. Every morning Bowie heads into Blessings, and readers follow his day and the machinations of the Boone family, but there is nothing of Rowan. Rarely are modern romance heroines so passively underdeveloped; Rowan does little more than prepare dinner and wait for Bowie to return home and make her a character again.

Overwrought small-town drama relegates the romance to an unsatisfying subplot.