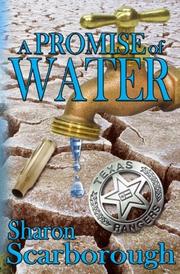 A PROMISE OF WATER

Former Texas Ranger Oswald “Oz” Nightingale is in a rut. After a particularly dark case involving the death of a friend, and another in which he was wrongfully accused of theft, he quit the Rangers and struck out on his own. But he did truly love serving his community, so when a friend in the governor’s office offers him a job, he jumps at the chance. With drought threatening, Oz is tasked with convincing Constance Dearborn, a stubborn landowner, to sell, which would allow the state to build a new reservoir and guarantee clean water for his beloved hometown of Broken Rock, among many others. Oz attempts to strike a fair deal and shield Mrs. Dearborn from the harsh reality of an eminent-domain seizure. But matters are more complicated than they seem, and soon threats, potentially violent environmental activists, and even family feuds come into play. When Mrs. Dearborn turns up dead and a teenager named Cayden becomes a prime suspect, Oz has to choose between the law and the greater good in a world filled with less-than-honest characters and shifting, hidden motives. The story is fast-paced and engaging, with a breadth of secondary characters standing with or against Oz. Scarborough does an impressive job of making sure that these characters are distinct and memorable, so that readers won’t lose the thread among the twists and turns. Likewise, the prose is mostly strong and direct, providing illuminating descriptions, although characters’ names are sometimes overused, in lieu of pronouns: “Nightingale and McGowan had been in touch through the years. Nightingale knew McGowan worked hard to get to be the right-hand man to the governor, so he was not surprised at McGowan’s status.”