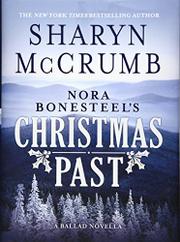 A Christmas story loves nostalgia, and a ghost doesn’t hurt either; both appear in this tale of Tennessee mountain charity and goodwill. Though it’s Christmas Eve, Sheriff Spencer Arrowood and Deputy LeDonne have a warrant for the arrest of J.D. Shull, wanted for crashing into the Mercedes of a senator’s wife. They're hesitant to go into the back mountains—they don’t want to be stranded in the snowstorm they can see is coming—but LeDonne is a stickler for rules; waiting until after the holidays just won’t do. Meanwhile, Nora is trying to solve the mystery of her new neighbors, the Havertys, Florida transplants now living in the old Honeycutt place. It seems the Havertys' Christmas tree (a silver foil tree decorated with pink flamingos!) keeps getting knocked over. In between Nora’s reminiscences (in glorious Christmases past, Judge Honeycutt would invite the whole mountain community to his farm), she also remembers when Grandma Flossie warned her not to let people know she had “the sight,” as it’s better to let life proceed as it’s meant to. As Nora considers how to help the Havertys, the sheriff and LeDonne have reached Shull, who needs a mess of chores done before he can be taken into custody, so his elderly wife and the cows don’t freeze while he’s away. As Nora suspects that the Christmas spirit may be the ghost of Tom Honeycutt, killed in World War II, the sheriff and LeDonne discover they may have just been hoodwinked by a crafty old mountain man.

Though Nora's fans will want to know what she gets up to at Christmas, the plot and sentiment feel too thin to resonate with newcomers.