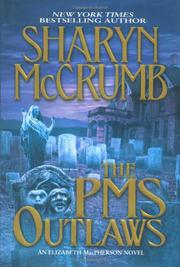 These are dark times for Elizabeth MacPherson (If I’d Killed Him When I Met Him . . . , 1995, etc.). Two months after her husband, marine biologist Cameron Dawson, disappeared on a seal-watching expedition in the North Atlantic, she allows herself to be admitted to Cherry Hill sanitarium, at first acknowledging her widowhood but gradually retreating into the fantasy that Cameron is missing, not dead. Although paralyzed by depression and numbed by her medication, the forensic anthropologist in Elizabeth remains fascinated by the social order that rules this brave new world, where not the strong nor the rich but the most shamelessly honest dominate. She comes to respect patients like Emma Kudan, whose Asperger’s syndrome leaves her disconnected from human society but acutely aware of its injustices, and Rose Hanelon, whose wit and intelligence have cost her the affections of the mediocre man she loved. Her prize, however, is ex-federal agent Hillman Randolph, who recognizes the photo Elizabeth’s brother Bill sends of his new law offices as the home of Jack Dolan, the criminal whose ill-fated capture left Randolph disfigured and bitter. Searching for answers to Dolan’s disappearance, Elizabeth sends her eccentric cousin, Geoffrey Chandler, back home to Danville to see Bill. But Bill has a dilemma of his own. He has a new house to refurbish, and his partner, A.P. Hill, is out tracking the duo the tabloids call “The PMS Outlaws”—feminist avengers led by A.P.’s old law school rival P.J. Purdue.

As the plots interweave, their common themes—our obsession with beauty, our retreat from truth, and our denial of madness—resonate through McCrumb’s sensitive, elegant language.