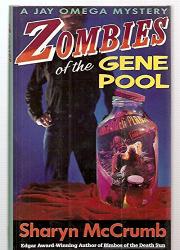 ZOMBIES OF THE GENE POOL

Here, the frisky McCrumb (If I Ever Return, Pretty Peggy-O, The Windsor Knot—both 1990), with deadpan humor and bull's-eye accuracy, skewers the science fiction genre, its eccentric authors, and outlandish fans and their nitpicking fanzines. Jay Omega and Marion Farley (the paperback Bimbos of the Death Sun) agree to accompany fellow professor Erik Giles (a.k.a. sci-fi writer C.A. Stormcock) to a reunion of the ``Lanthanides,'' a group of would-be writers who lived together in Wall Hollow, Tennessee, back in the Fifties. Now, one is dead, one is a Hollywood nabob, one is publishing a fanzine, and a couple are still writing and have become sci-fi stars. At Wall Hollow, they plan to dig up a time capsule they buried with some of their early work and cash in on their later fame by auctioning off publication rights to the highest bidder. Then someone starts killing them off, beginning with the reunion crasher—the supposedly dead author Pat Malone. Omega, with the help of computer log-ons, finally figures out not only whodunit but why...or does he? Author McCrumb has one more twist up her sleeve. Funny bits throughout, but the constant sendup of beloved sci- fi shticks begins to seem mean-spirited, and Omega and Marion are little more than walk-ons. Still: an engaging read.