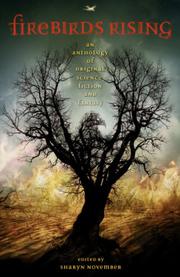 An Original Anthology of Science Fiction and Fantasy

The second Firebirds anthology gathers an all-star cast to explore adolescence and discovering the world. Tamora Pierce makes a welcome foray into modern fantasy with a schoolgirl whose family worships an ancient hunt goddess and who discovers social responsibility. For Alison Goodman’s psychic heroine, social upheaval is the backdrop for both romance and personal growth. The protagonists of Carol Emshwiller’s “Quill” and Alan Dean Foster’s “Perception” are forced to look at themselves through the eyes of aliens, while Emma Bull’s hero learns a little something about hubris, sacrifice and power. Diana Wynne Jones brings a lighter touch with a boy whose younger brother speaks in nonsense strings of sesquipedalian words, and Kara Dalkey adds contemporary flavor, taking the current trend for constant communication among teenagers to a terrifying extreme. Only Francesca Lia Block’s shapeless offering disappoints, but it’s more than redeemed by Pamela Dean’s fully realized and fascinating heroine. A third of the collection is devoted to science fiction, an exciting presence in a field dominated by fantasy. Altogether, a gorgeous and rich collection. (Fantasy. 12+)