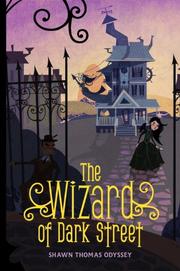 THE WIZARD OF DARK STREET

Oona would rather solve cases than cast spells, but her decision not to apprentice to her uncle, The Wizard of Dark Street, has disastrous consequences.

In 1877, 12-year-old Oona is a rare natural magician, but she has reasons beyond an interest in detection to shun her magical heritage—personal reasons. Although she lives with her magician uncle on Dark Street, last of the 13 roads between the worlds of Man and Faerie, Oona wants to follow in her dead father’s gumshoe footsteps and solve crimes. When the ceremony to name a new apprentice to The Wizard ends abruptly with the disappearance of her uncle and prompts local crime boss Red Martin to attempt to take possession of Pendulum House, magical linchpin of Dark Street and traditional home of The Wizard, Oona and her talking raven Deacon are on the case. Odyssey’s debut is a sad thicket of extraneous detail and repetitive exposition with a regrettably unexplored historical setting. Oona is engaging enough, but those around her don’t rise to her level of characterization. The mystery offers some appeal, but the “magical” setting is a pale reflection of Diagon Alley.

The interesting and satisfying conclusion to the mystery just doesn’t make the long rambling journey worth the trip.