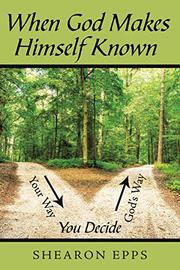 WHEN GOD MAKES HIMSELF KNOWN

Fifty-five-year-old Robert Maxwell, the pastor at Believer’s Community Fellowship Church in Graceville, Alabama, feels tempted every Sunday as he looks out and sees Emma Crane sitting in one of the pews. “What is wrong with you?” he chastises himself after one service. “You have the most amazing wife on the planet, and you love her with all your heart, so why does this continue to happen to you?” Forty years ago, Robert and Emma were middle school sweethearts; sometime after she moved away, he became a devout Christian, married a woman named Amelia, and had children. But ever since Emma moved back to town two years ago, Robert has felt old feelings stirring—and he’s asked God for help in dealing with them. Robert already has enough on his plate between his duties as pastor and his day job at a business-operations consulting firm, not to mention the troubles of his daughters and their husbands—one of whom he likes, and one he doesn’t. As he goes through his daily life, the various challenges he faces test his faith in ways great and small. Emma is perhaps his greatest test of all—but how should a true man of God face it? Epps writes in an easygoing prose style that effectively channels the rhythms of his protagonist’s daily life: “Robert was looking forward to his week off….Saturday at his in-laws was very peaceful. Amelia brought the ingredients to cook two-pound cakes.” It isn’t a very gripping yarn—Robert is hardly Job in terms of the trials that God sets before him—and it wraps up in a way that one might expect in a Christian novel about a devout man. Even so, Epps presents a realistic tale that’s firmly religious without being overwhelmingly dogmatic. Christian readers looking for a low-stakes slice-of-life story about family and community will likely enjoy this short volume.

An unpretentious, if rather low-key, story about a pastor looking for the hand of God.