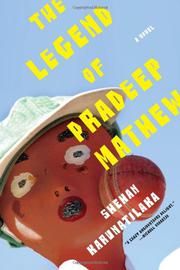 THE LEGEND OF PRADEEP MATHEW

An investigation into the life and times of a mysterious Sri Lankan cricket player from the perspective of an obsessed fan.

Though Sri Lankan himself, sportswriter Wijedasa Gamini Karunasena (Wije to his friends) fits in well with the American stereotype of the journalist as a cigarette-smoking boozer. He and his friends spend their time compiling and arguing about all-star cricket teams, in much the same way Americans would argue over the relative merits of DiMaggio, Williams and Mantle. After years of abusing his liver, and after the Cricket World Cup matches in 1996, he begins to track down the enigmatic Pradeep Mathew, a “spinner” and the best Sri Lankan cricketer ever. (One sign of Pradeep’s omnipresence in the culture occurs when one of the journalist’s friends refers to Montgomery Clift as "the Pradeep Mathew of the silver screen.") In a short period of time Pradeep made a splash and then disappeared, and his mystery involves being simultaneously forgotten and mythologized. Wije is determined to track down the cricketer’s movements and ultimate destiny, so he puts ads in the paper, fishing for "anyone who knows anything about...," and he has limited success—a woman who claims to be his sister, a former girlfriend who has a handwritten poem from the athlete—but Pradeep and his legacy largely remain silent. Wije plays out his obsession with his friend Ari but against a family he’s neglecting, and his problems with whisky eventually land him into a 12-step recovery program.

The novel works on many levels—including the sociological and the mythic—and can serve as a primer both for adepts and for those who’ve never seen a cricket match.