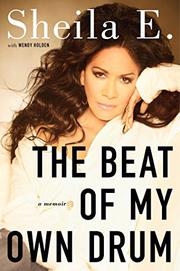 THE BEAT OF MY OWN DRUM

by Sheila Escovedo with Wendy Holden

A noted percussionist and singer gets personal about her life and rise to fame and fortune.

From a very early age, Escovedo seemed destined to have a musical career. As an infant, the pounding of her percussionist-father Pete Escovedo’s drums “felt like the heartbeat of [her] life.” Though sports were the author’s earliest passion, the older she got, the more music became the outlet for the bitterness, guilt and anger she felt at being raped by a babysitter at age 5 and molested by male cousins for six years after that. Drawn to gangs as a young teenager, Escovedo found salvation in athletics and music. Two years later, she got her first big break when world-famous drummer Billy Cobham asked her to tour with him. At 18, she began a “life-altering” relationship with Carlos Santana. Their association ended when Escovedo discovered he was married, but her own musical star continued to ascend. Soon, she found herself playing backup for such legends as Diana Ross, Chaka Khan and Marvin Gaye. She joined forces with Prince, the second great love of her life, in the early 1980s. He helped her step out of the shadows and become Sheila E., a star in her own right. But money and notoriety took their tolls. Without her realizing it, she became a “mean, demanding and angry” diva. A breakup with Prince and breakdown of her own body led Escovedo to face her past sexual traumas. In the aftermath, she dedicated her life to God and to helping abused and disadvantaged children find “a means of processing their pain” through music. As a chronicle of one woman’s path through the male-dominated worlds of Latin music, soul, funk and pop, Escovedo’s book, written with Holden, is interesting and unique, but its greatest appeal will be to fans who know her best as Sheila E.

A candid and uplifting musical memoir.