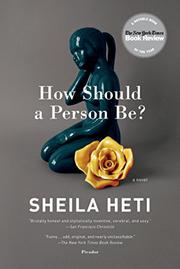 HOW SHOULD A PERSON BE?

A Novel From Life

Toronto-based Heti (Ticknor, 2006, etc.) and her real-life friends, including Misha Glouberman with whom she wrote a previous book (Where the Chairs Are Where the People Go, 2011), are central characters in this meandering novel that attempts to erase the line between fact and fiction.

Sheila is a recently divorced playwright—the marriage ended at her request for no clearly spelled out reason—attempting to finish a commissioned play while working part time in a beauty salon where her boss Uri is a kind of guru preaching beauty in balance. She claims what she desires is a simple life of fame without having to change her life. She also talks quite a bit about her search for a sense of self. She spends time with her friend Margaux, an artist who lives with Misha and has entered an ugly painting contest with another painter friend of Heti’s named Sholem. Heti buys a digital tape recorder and the novel includes actual taped conversations with Margaux, to whom the novel is dedicated, as well as emails between the two. Margaux and Heti have a falling-out because Margaux feels Heti has invaded her private boundaries, both by taping her and, more egregiously, by buying the same yellow dress while they are at an art festival in Miami. Meanwhile, Sheila has met Israel, who works in a bakery. He considers himself a painter, but Sheila recognizes his real art lies in the sex department. She describes their sadomasochistic antics in explicit, though untitillating detail. For a while, Sheila and Margaux fall into a pattern of heavy partying and druggy debauchery until Margaux pulls away. Sheila worries she’s a narcissist, not without good reason perhaps. Claiming imperfect wanderer Moses rather than sinless Jesus as spiritual guide, she leaves Toronto for New York, but she’s no happier there. After a gambling jaunt to Atlantic City, she returns to Toronto in time for the conclusion of the ugly painting contest.

Pretentious navel-gazing without the humor of HBO’s Girls, which covers similar terrain.