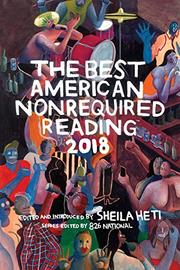 A decade and a half after its inception, the annual “nonrequired reading” continues along its quirky path—so quirky at times, in fact, that the editors want us to know that “no one was on drugs when we put it together.”

Founded by novelist Dave Eggers in 2002, the Nonrequired Reading has a delightful twist baked right into it: It’s judged by high school students, and the proceeds go to 826 National, a cluster of writing and tutoring centers around the country. By guest editor Heti’s account, the process of working with those young people was as important as the product; says one student judge, “we’re not worried about analyzing the pieces—we’re not worried about picking apart every motif because we’ll have to write an essay on it.” It should be said, on that note, that the product doesn’t suffer by comparison to older kin such as the Pushcart annual; in addition, the BANR volumes, drawing from a wide pool of reading, have tended to emphasize a welcome diversity along all lines as something more than a polite nod. The themes are often quite grown-up, too. A story early on, for instance, by the Chinese writer Qiu Miaojin, features alcohol, albeit alcohol ejected from the body in ways teenagers will understand, and same-sex lovemaking, accompanied by lashings of angst. From the late journalist Alex Tizon comes an essay that ignited a storm of controversy when it appeared in the Atlantic, recounting a dark family secret: “I had a family, a career, a house in the suburbs—the American dream. And then I had a slave.” Other stories and poems tend to less fraught but still engaging topics. A standout among many high points is Annie Baker’s decidedly centrifugal play, “The Antipodes,” which goes from family drama to horror as a character realizes that the fence of a neighbor’s house “is actually made out of bones and on the top of every post is a human skull.”

Literary culture is in good hands in this top-shelf collection.