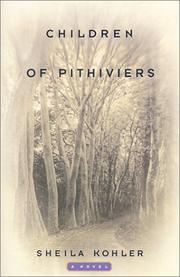 With only medium success, the children’s concentration camp at Pithiviers is the inspiration for this indictment of French collaboration with the Germans in WWII.

The story is told by a South African woman living in the US who’s haunted by a sentence she found written in the margins of someone else’s book years ago: “Mother said everything would be all right; nothing seriously wrong can happen in France: Is it not the country of the Rights of Man?” In 1959, 17-year-old Deidre, or Dodo, was an innocent young girl studying at the Sorbonne when she became pregnant by her young French boyfriend. After an abortion, her sister and French brother-in-law pack her off to the country to recover. At the château, she meets and quickly becomes enchanted by her ageless hosts, the de C’s, first the Madame and then the Monsieur, who bear a striking resemblance to each another, inbred aristocrats that they are. Meanwhile, Dodo discovers a cache of old books (“the Rights of Man”) and magazines in the attic; she writes to her mother but receives no reply; her sister’s husband rebukes her for complaining about the aristocratic de C’s; she dreams of a drowning girl; and the squat Spanish cook, Dolores, slips into her bedroom to tell tales about her hosts. Young, naïve Dodo is isolated, with little money. A Frenchman gets her pregnant; and the aborting physician crudely takes advantage of her during the examination. And though she discovers that the cache belonged to two young Jewish girls who hid in the attic, she can’t decipher the messages, the warnings, found in the books. Finally, after a heady courtship by the Madame, who woos her with presents and a fancy party (bought with her mother’s money, unknown to her), she becomes easy prey for the libidinous Monsieur. Inevitably, death ensues.