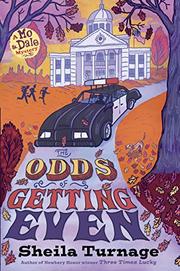 THE ODDS OF GETTING EVEN

Folks from Tupelo Landing, North Carolina, lay on the colorful phrases thick as gum molasses in the wintertime, with character and personality as plentiful as okra at a Southern wake.

However, it's no wake that brings together the whole town in this second follow-up to Turnage's award-winning debut, Three Times Lucky (2012), it's the trial of Tupelo’s century. And sixth-grader Mo LeBeau and her detecting partner, Dale Earnhardt Johnson III, are once again at the center of it all. Turnage continues to delight with her mix of homespun humor, well-plotted mystery, and delicious characterization. At 342 pages, the novel is longer than its two predecessors, but readers probably won’t notice. Lavender, Dale's brother and Mo's unknowing intended (in just seven more years), is in mortal danger, and Dale and Lavender's no-good daddy, Macon, is on trial, so there’s more than enough to fill a book and keep the founding members of the Desperado Detective Agency occupied. The fun is in the telling, and Turnage's telling shows alacrity as well as aplomb. The author gracefully weaves a laundry list of characters with a plot that has a lot of moving pieces, and she does it with charm and humor, hitting the sweet spot for young readers searching for more-complex tales but not ready to leave the silly behind.

As always, Turnage's tale is full of heart and perfect for reading on a front porch.