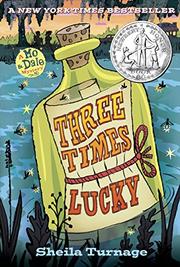 What do you get when you combine Because of Winn-Dixie’s heart with the mystery and action of Holes? You get an engaging, spirit-lifting and unforgettable debut for young readers.

Turnage introduces readers to the homey yet exotic world of Tupelo Landing, N.C., well-populated with one-of-a-kind characters. A stranger with justice on his mind has just arrived in town, and Hurricane Amy is on its way. Rising sixth-grader Mo LoBeau leads the cast through a series of clues as the whole town tries to figure out who among them might be a murderer. The novel’s opening lines reveal the unflappable Mo LoBeau as a latter-day Philip Marlowe: “Trouble cruised into Tupelo Landing at exactly seven minutes past noon on Wednesday, the third of June, flashing a gold badge and driving a Chevy Impala the color of dirt.” This is the first of many genius turns of phrases. Pairing the heartbreaking sadness of children who don’t get their fair share from parents with the hilarity of small-town life, Turnage achieves a wickedly awesome tale of an 11-year-old girl with more spirit and gumption than folks twice her age. Mo LoBeau is destined to become a standout character in children’s fiction.

Readers may find they never want to leave Tupelo Landing.