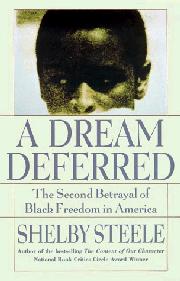 The Second Betrayal of Black Freedom in America

A black conservative confidently explains the motivations of white liberals. Steele, author of The Content of Our Character (1990), which won a National Book Critics Circle Award, and a senior fellow at the Hoover Institution at Stanford, sets the tone for the book by defining a black conservative as one who “dissents from the victimization explanation of black fate when it is offered as a totalism.” In other words, he identifies himself in relation to a potentially serious argument after all subtlety is removed and what remains is a rigid orthodoxy to be promoted or attacked. Not surprisingly, Steele attacks—but why expend energy demolishing this straw man unless you are intent on writing a polemic? The answer, of course, is that this is a polemic, and there is no room for subtlety between the covers of this volume. Somehow Steele has convinced himself that criticizing a flawed mainstream position automatically guarantees the truth of his own beliefs. Apparently, this specious logic excuses proceeding in a manner he would not tolerate in his opponents: while criticizing the work of a liberal social scientist because “rough inference and unexamined correlations” replace “rigorous science,” Steele offers only inference and anecdote to support his own pronouncements. It also seems to bestow an unusual ability to see into the minds and hearts of those with whom he disagrees and to explain their deepest emotions. As a result, Steele explains that racial politics since the advent of affirmative action have been a function of white guilt and that shame has produced policies that reinforce white dominance and encourage black feelings of inferiority. There is undoubtedly an element of truth here, but serious discussion of it will be foreclosed by Steele’s overreaching claim to have uncovered the sole motivating factor of liberal race policies. A contribution to that genre of political writing that appeals to those seeking arguments to buttress previously held policy preferences without promoting serious thought or improved public policy. (Book-of-the-Month Club alternate selection; author tour)