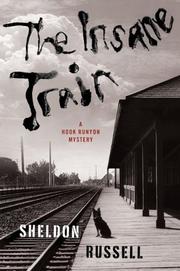 A one-armed railroad-security agent’s troubleshooting branches out into new territory.

Hook Runyon (The Yard Dog, 2009) and his scruffy dog Mixer have a new assignment: Stop checking the tracks around Needles, Calif., and hustle over to Barstow, where the inmates of an insane asylum that burned down need to be transported to a site in Oklahoma. The catch: The surviving male inmates are from the criminal wing, and one of them may be the arsonist who started the fire. They will all be heavily medicated for the train ride and under the care of Dr. Baldwin, who has been feeling poorly lately, and Dr. Helms, who inexplicably trusts the untrustworthy asylum attendant Frankie Yager. Andrea, the heroic nurse who saved the female residents, will handle their care, assisted by a cadre of hobos, all World War II vets with antisocial difficulties, hired for the trip by Hook. The ride is chaotic. Two passengers die; the heat is overbearing; equipment breaks down; and Hook learns that complaints have been made about the asylum to the American Board of Psychiatry. When they finally arrive at the new site, a dilapidated former prison, the townspeople are hostile, Dr. Baldwin has to be hospitalized, and when Hook, reassigned, returns to see Andrea, she’s vanished. Her disappearance is just one more task for Hook to handle before gathering up Mixer and taking to the rails again.

Train buffs and fans of the 1940s will be satisfied, particularly by the depiction of the hobo brotherhood, but the sketchy plot may disappoint mystery aficionados.