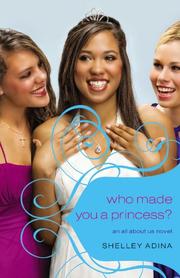 WHO MADE YOU A PRINCESS?

In an installment from the All About Us series, readers find 17-year-old Shani in a boarding school for the super-wealthy, dealing with the important issues in her life: designer clothes, two hottie boys, friends, parties, curiosity about God and, when she can fit it in, schoolwork. After she’s already developed a strong attraction to Danyel, a handsome, poor Christian surfer, she meets Rashid, a gorgeous billionaire prince who’s attracted to her. It turns out that Shani’s oil-company–owner dad, who depends upon his relationship with Rashid’s royal father, has promised Shani as Rashid’s bride. Shani faces a difficult choice: to accept the arranged Islamic marriage to Rashid, whom she likes enormously, or to choose Danyel and Christianity, thereby destroying her father’s company, impoverishing her family and throwing 2,000 people out of work. The plot is absurd and the “surprise” at the end laughable, but there is much to appeal to young female readers, and Adina keeps her writing sprightly. She portrays the wealthy as having the same emotions as the rest of us, and also needing God. Many girls will love it. (Fiction. 12-18)