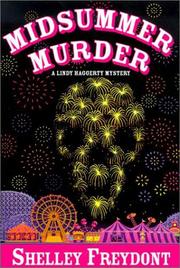 As rehearsal director of the Jeremy Ash Dance Company, Lindy Graham-Haggerty (High Seas Murder, 2000, etc.) has the plummy perk of traveling alongside her best friend Biddy McFee, the company’s business manager, to a host of exciting locations for a series of gala recitals. If only she didn’t run into one pesky murder after another along the way! The minute she gets off the bus at the Easton Arts Retreat in upstate New York, she’s confronted with the latest: Larry Cleveland, one of the teenagers at the Retreat’s summer dance camp, has met his untimely demise the day of the Ash troupe’s arrival by plunging into a ravine. Not only does the death of streetwise, manipulative Larry cast a pall over the Retreat’s founders—wealthy, elegant Marguerite Easton and her slightly addled brother Ellis—but it brings troglodyte Sheriff Byron Grappel onto campus, where he can harass his former sweetheart, Chi-Chi Stokes, by trying to pin the murder on her husband, Robert. Lindy so wants to solve this case that she wades through all sorts of sordid liaisons, straight and gay, romantic and financial, to discover who might want to see young Larry dead—or see the Eastons discredited. But the relationship she can’t quite sort out is her own with retired detective Bill Brandecker, whose unrequited feelings for married Lindy bring him into the case all too closely on the Eastons’ side.