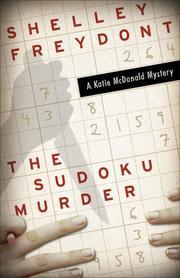 A think-tank mathematician proves you really can go home again, in this series-starter from the creator of dance detective Lindy Graham-Haggerty (Halloween Murder, 2002).

Kate McDonald thought she’d left Granville, N.H., and all the taunts she’d suffered as a geeky schoolgirl far behind. But when a letter from her childhood mentor, Prof. P.T. Avondale, begs her for help, she takes a leave of absence from her job at The Institute for Practical Mathematics to return temporarily to her childhood home under the watchful eye of Aunt Pru, who thinks even girl geniuses ought to be married. The professor wants her to save the Avondale Puzzle Museum, where Kate passed the only happy hours of her youth, from developers who covet the land for an outlet mall and from greedy banker Darrell Donnelly, who wants to foreclose because of an overdue loan. Aunt Pru would like Kate to date grocer Louis Albioni, or bowler Norris Endelman, or just about any native son who might divert her growing interest in Boston-import police chief Brandon Mitchell. She and the chief are destined to mingle, though, because P.T. is found stabbed to death. Despite warnings, Kate makes it her mission not only to rescue the museum but to bring its founder’s killer to justice.

Not as bad as most defiant-damsel sagas. Still, the conundrum of whether Kate will live to sleuth another day is a no-brainer.