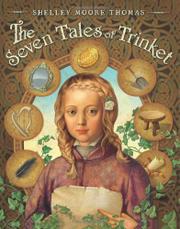 THE SEVEN TALES OF TRINKET

Like her main character, Trinket, Thomas clearly loves storytelling, and she has a real talent for it, too.

Seven interlinked episodes follow a brief exposition. The distinctness of these episodes keeps the text from seeming overlong, particularly since the smooth flow and intriguing elements will easily capture readers’ interest. Unusual characters (a gypsy princess, fairy queen and ghostly highwayman, among others) add excitement and suspense, while the overarching tale, which effectively connects the disparate characters and individual events, features a quest of sorts. Eleven-year-old Trinket recently lost her mother to a fever. Her father, a wandering bard, abandoned the family five years ago when he failed to return as promised from a storytelling sojourn. With no one to care for her, Trinket sets out with a friend to discover what became of her father—and to collect some stories to tell. Hardships abound, and the two often go hungry, but they persevere in their search. Readers familiar with Celtic folklore will recognize the outlines of some of the sections. But even those for whom selkies and banshees are brand-new will appreciate the clever way Thomas weaves together traditional elements and her fictional creations.

Though it’s filled with incident, emotion, magic and adventure, what stands out most is Trinket’s clear voice and loving heart, both of which will endear her to readers.