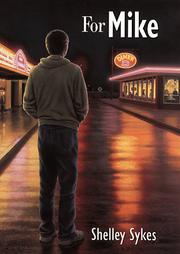 Strange, recurrent dreams and startling revelations follow the disappearance of a teenager's best friend in this well-knit debut. Three weeks after he drops out of sight, Mike reappears in Jeff's dreams, bloody and begging for help. Turning reluctantly for advice to Berry, a younger schoolmate with an interest in the paranormal, Jeff struggles to find the meaning of his dreams; in conversations with Mike's family, his priest, and a slightly unsavory mutual acquaintance named Jerry Kirby, he discovers facets of Mike—including a comfortable, deeply rooted religious faith—that are utterly new to him. Sykes introduces clues at just the right pace to build suspense, and in Jeff creates a protagonist who, while nursing inner wounds of his own, is capable of recognizing pain in others, and, sometimes, easing it. As he helps shepherd Mike's younger siblings through Halloween, the eventual discovery of Mike's body, the funeral, and sad preparations for Christmas, Jeff emerges as an appealingly sensitive, intelligent young man, sometimes awkward, always willing to shoulder responsibility. Unlike Michael Cadnum's Zero at the Bone (1996), this novel does not leave characters and readers hanging, never to know the truth of things: After Mike's body is found, in a melodramatic graveside scene, Kirby confesses to shooting him by accident. An above-average mystery, with a supernatural twist, a romantic subplot, and answers and forgiveness at the end. (Fiction. 12-15)