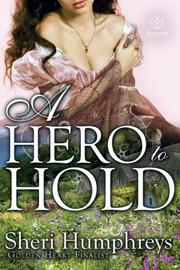 A Hero to Hold

The establishment of a Crimean War charity unites a gentlewoman and a dashing veteran in Humphreys’ debut Victorian romance novel.

Viscountess Charlotte Haliday suffered exile in the country following her husband’s suspicious murder. After she returns to London, her work for the Royal Patriotic Fund introduces her to David Scott, a Crimean War hero who’s more than capable of stirring her broken heart, despite his disabling injury: a Victoria Cross medal recipient and cavalry soldier, David’s legs were crushed under his fallen horse, leaving him wheelchair-bound. His work at the Royal Patriotic Fund assisting war widows gives him purpose, but navigating fashionable society as a disabled person remains challenging. Charlotte’s own search for meaning lands her a position assisting David, and their charitable natures draw them together: “David’s compass was clearly his heart,” Charlotte thinks. They begin as friends but quickly become lovers. They agree to an affaire de coeur without marriage, but their businesslike arrangement quickly deteriorates, both in the office and the bedroom, as their passion further ignites. When questions surrounding the murder of Charlotte’s husband resurface, threatening her reputation and spawning an attempt on her life, she and David must confront the true depth of their feelings. Humphreys’ exceptional debut utterly stuns with its professional style, natural dialogue, and extensive research. It’s dotted with minute details concerning the Crimean War throughout, elucidating David’s war service. It also skillfully incorporates facts about Queen Victoria’s reign and the founding of the charity into the plot. The depiction of David’s disability is overwhelmingly positive, focusing on his adaptability while still addressing his daily challenges; Charlotte, meanwhile, is appropriately solicitous but never condescending. The portrayal of such an unexpectedly unique couple in a scintillating, romantic, and highly erotic relationship is as refreshing as it is realistic.

An enthralling, nontraditional romance accented with a little mystery.