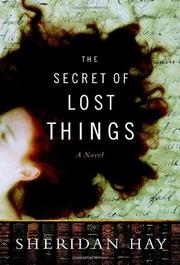 THE SECRET OF LOST THINGS

A triangle of unrequited love and a tussle over an apocryphal Melville manuscript enliven Hay’s bildungsroman.

Eighteen-year-old Rosemary, father unknown, journeys from Tasmania to New York City after her mother’s hat business fails, followed soon by her death. Rosemary lands a job at the Arcade, a musty warren of used books, patterned after the Strand bookstore and staffed by bookish boors: skinflint owner Pike; the big lugs who wrangle the paperback tables; beautiful, asexual Oscar, on whom Rosemary nurses a crush; myopic albino Geist, who prices review copies for resale; and Mitchell, who beguiles well-heeled clients in his rare-books room. After Geist, besotted with Rosemary, floats her a loan, she sublets a cold apartment in a bad neighborhood and gamely dresses it with gimcracks and keepsakes, including a box containing her mother’s ashes. There she entertains gal-pals Lillian, from Argentina, whose son was among the “disappeared,” and Pearl, a pre-op transsexual who works the register at the Arcade. Geist asks Rosemary to read him an anonymous letter offering for sale a contraband Melville manuscript. Rumors of the letter, obviously intercepted before it reached Pike, fall from Rosemary’s loose lips, kindling suspicion and booklust in Mitchell and Oscar, who compulsively researches obscure facts. In two pokey chapters, Rosemary and Oscar peruse Melvilleanea, including the “Agatha Letters” to Hawthorne (large chunks of which are excerpted verbatim), detailing Melville’s idea for a novel about a wife abandoned by her sailor husband. Once the two deduce that Geist’s quarry could be that same book (The Isle of the Cross, rejected by Melville’s publishers, no known copy in existence), the story picks up speed. Geist’s plot to fence the manuscript is exposed too late to redeem him or Oscar, but Rosemary, leaving bookselling behind for publishing, has amassed invaluable life experience, not to mention avuncular advice from her colorful older mentors, most of whom she cheerfully—and thankfully—ignores.

A tribute to the book-obsessed that’s unfortunately cast with stereotypes.