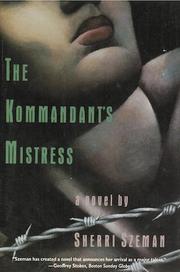 A somber what-if first novel that vividly explores a possible relationship between the Kommandant of a Nazi concentration camp and a Jewish inmate. The story is first told by the Kommandant, then by Rachel, his mistress, with a concluding chapter purporting to be the official record that calls into question all that has gone before. Maximilian von Walther is an idealistic young man who joins the Nazi party and is soon promoted to Camp Kommandant for his loyal service. He is also a coldblooded sensualist who treats his wife and former mistresses with disdain, but Rachel, the beautiful Jewish woman he selects out of a group of new arrivals at the camp, is different: she makes him feel ``almost happy.'' When the war ends, Walther sends his family to South America and somehow manages to evade prosecution. His past, however, catches up with him: a young man threatens to expose him; another tries to kill him; and The Dead Bodies, a book he believes Rachel has written, is published. Finally, Walther seeks out Rachel in the American countryside, where he tries to defend himself against ``the lies'' in her book. Rachel then takes up the story: she's a promising poet, but as the Germans tighten their control, she gives up her writing to help her elderly parents survive. Unlike Walther, she has no tender memories of their relationship. Raped and brutalized by him, she struggles to survive not only his treatment but the scorn of fellow inmates whom she tries to help. Now, the war over, Rachel is haunted by the past—and an encounter she knows must occur. A provocative exploration of a complex and disturbing relationship—the parameters of which are sometimes overwhelmed by the lyrical intensity of Szeman's writing and vision.