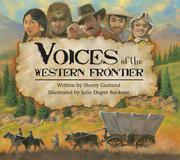 VOICES OF THE WESTERN FRONTIER

A wide-angled overview of the settling of the American West in first-person, free-verse poems.

As the title implies, the era is regarded, even by the few non-Anglo witnesses, from a decidedly Eurocentric point of view. Garland opens with statements from Sacagawea (the only Native American), trapper Jedediah Smith, and George Catlin, but all of her other “voices” are anonymous ones ("I am a girl walking along the Oregon Trail") until Annie Oakley steps in toward the end. The observations are largely likewise generic—“Since the Louisiana Purchase twenty-two years ago, / trappers have been depleting the beaver everywhere,” complains Smith. They are occasionally cringe-inducing: the Chinese railroad worker is proud to have earned “respect from our bosses for a job well-done,” and the “Buffalo Soldier” identifies himself as “a former slave / who joined this all-Negro regiment in 1866.” A long historical note displays similar lack of sensitivity, capped by a claim that the Indian Wars were started by “renegades” out for payback for the slaughter of the buffalo. Depicted in period dress and settings, most of the improbably clean, largely light-skinned figures in Buckner’s painted portraits look directly at readers. The chronologically arranged entries end with a modern child at a rodeo, observing that “today the Indians wear boots and hats and jeans. / But for a little while, in front of cheering crowds, / the old Wild West lives once again.”