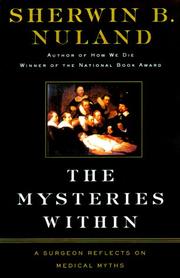 A Surgeon Reflects on Medical Myths

by Sherwin B. Nuland

A briskly surgical removal of the harmful nodes of legend infesting medical science.

Nuland continues, in this study of the body’s major organs, the myth-busting rejection of magical higher powers that inspired his National Book Award-winning How We Die (1993) and The Wisdom of the Body (1997). His hysteria-ectomy cuts away millennia of superstition about the humors, elements, and so on, while recalling medical history’s progress from belief in the unseen to belief only in the seeable: "Since Western medicine's origins in ancient Greece some twenty-five hundred years ago, the perspective of its researchers and practitioners has been that the processes of both normal and diseased physiology must be visualizable in order to be understood in any realistic way." Nuland seasons the journey from the ancients' insistence on metaphysical theories of cosmic unity to Francis Bacon's verifiable "scientific method" (still ignored by holistic medicine) with his personal experiences in treating organ disorders. When the left lateral lobe of a patient's liver improbably regenerated, Nuland ascribes it simply to "dumb luck." He is moved, however, by the joy of a spouse to whom he gave an overly optimistic prognosis. The skeptical author feels that religion has an honorable place in the hospital, but only at bedside. Many readers will agree that the stomach is not the seat of the soul, that the spleen does not produce melancholy nor the uterus hysteria. On the other hand, the surgeon's scalpel may be too quick to scrape away mysterious but verifiable data on topics like astrology and prayer's effect on health. And while it’s true that no one should identify the heart with the locus of feelings, it’s equally true that ancient writers never used the term for that four-chambered pump in the thorax as a synonym for the throbbing, trembling berth of emotions. Mysteries shmysteries! Just let articulate atheists and miraculous doctors like Nuland keep on extending the lives of the faith