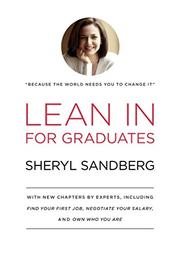 In her first book, the author looked at why women’s progress in achieving leadership roles has stalled and gave advice to women on reaching their full potentials. In what may be a harbinger of targeted Lean In books to come, Sandberg recruits a considerable number of women, and a couple of men, to add their voices to hers. Of the additional essays, the shorter pieces generally fall into the category of inspirational—e.g., a black woman describing how, through hard work, she overcame poverty, sexism and racism or an independent-minded woman telling how she dared to defy the convention in India against women driving cars and inspired others to do the same. Longer chapters provide solid, practical advice that would benefit young people of either sex, such as on finding a first job (by Mindy Levy, an executive coach) and negotiating salary (by Kim Keating, founder of a human resources consulting firm). Men contribute two pieces: a personal account revealing the contributor’s initial timidity at meetings and how he learned to assume his proper, assertive role and a longer essay titled “Man Up and Lean In,” which urges men to do their part in eliminating gender bias at work and gives specific ways in which they can become aware of and act to eradicate the problem. Finally, Rachel Thomas, the co-founder and president of LeanIn.Org, describes what that nonprofit organization has to offer and provides online links to its free programs.

An ideal graduation gift that, although aimed at women, has plenty to offer young men as well.