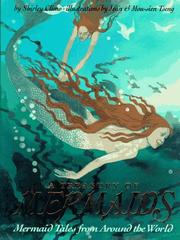 A TREASURY OF MERMAIDS

Mermaids Tales from Around the World

Mermaids haunt the waters of the world from the Lake of Zug in Switzerland to the reefs of Hawke Bay on the North Island of New Zealand. In a companion to A Treasury of Princesses (1996, not reviewed), Climo gathers eight representative tales of these beguiling aquatic creatures who know charms, cast spells, shift shapes, and wreak havoc, both undersea and above ground. Climo's compendium features an oceanic Snow Whitelike Scottish selkie story, a disagreeable Icelandic merman trickster tale, and a Japanese shape-shifting snapper who comprehends the language of the birds. The spectrum of mermaids appears here: powerful magicians filling the nets of fishermen, seductive voices luring sailors to their watery graves, or simply fish out of water, attempting misguided lives among humans. An eerily enchanting watercolor panel launches each mer-tale, followed by a pen-and-ink detail inserted in the story. Many of the stories adapted and collected here can be readily found in other sources, such as Mary Pope Osborne's Mermaid Tales from Around the World (1993). While the introduction to each tale demonstrates prodigious research, it becomes confusing in the inclusion of countries and of the various names of mermaids, until readers may feel awash in information. A section of story notes completes the collection. (Folklore. 6-10)