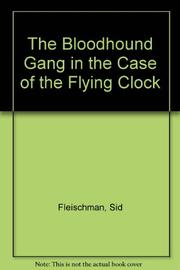 THE CASE OF FLYING CLOCK

These latest adventures of the Bloodhound Gang (from public TV's 3-2-1 Contact) have a little more zip than the dismally perfunctory lust two (p. 800, J-186), but there is still little evidence of the Fleischman wit, inventiveness, and high spirits. And of course the idea of three kids investigating for an insurance company is too far-fetched for any nine-year-old's reality meter. But that's the situation in The Case of the Flying Clock, when Vikki, Ricardo, and Zach check out the theft of a snobbish horologist's flying pendulum clock. "Once belonged to Louis," says pompous Mr. Keefe—Louis XVI, that is. But because they know that steam will fog a mirror and salty water makes objects more buoyant, the Gang deduces that Mr. Keefe did not see a red-haired robber, as he claimed, but instead dumped his plastic-wrapped clock in his wishing-well pending future removal. The Case of the Secret Message brings the Bloodhounds up against a purse snatcher, a smuggler called Mr. Big, his bodyguard Muscles, and a little old lady who seems first a victim, then a cohort, and at last reveals herself as a young policewoman. Perhaps the point of the series is that the TV tie-in will lead habitual viewers to print. In any case, these belong with the merchandise mysteries.