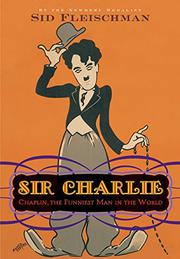 Chaplin, the Funniest Man in the World

Fleischman’s unabashed adoration for the duck-footed comedian, filmmaker and movie star effervesces from this fascinating, generously illustrated biography. How a nearly illiterate Cockney boy born to London vaudevillians in 1889 became a Hollywood movie mogul is truly one for the storybooks. The author is almost giddy in the telling, as if Chaplin’s flair for hyperbole and comic timing were contagious. When discussing Chaplin’s artistic perfectionism in demanding 100 retakes of a particular kissing scene, for example, the author quips, “The heroine went through enough lipstick to paint a small house.” Chaplin was an ambitious man who spent his life compensating for the poverty of his childhood, but his adulthood—despite the phenomenal fame and fortune that accompanied it—was complicated and often tragic. Movie-history buffs will learn about the effect of “talkies” on the silent-film industry, and on the pantomime master’s ego. Further exploration of Chaplin’s classic films, from The Kid (1921) to Modern Times (1936), is a must after finishing this colorful homage to “the funniest man on earth.” (Biography. 10 & up)