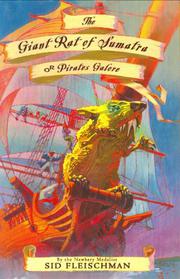 THE GIANT RAT OF SUMATRA

Edmund Amos Peters, nearly 13, is the cabin boy on the vessel known as the Giant Rat of Sumatra (named for its memorable figurehead) and the narrator of this delightfully crisp, compact tale of adventure and fortune. He’s known as Shipwreck because he was plucked from the remains of one by the pirate who likes to call himself Captain Gallows. Shipwreck accompanies the captain to shore in San Diego, where the pirate’s plans to become a gentleman and to find his childhood sweetheart are challenged by bandits and the threat of war. These obstacles are easily but satisfyingly overcome, and Fleischman’s prose snaps and crackles with good humor as the amiable buccaneer moves briskly from sea to the port of San Diego and on to his new venture as landowner of a large estate by the sea. The setting in 1846, just before Americans captured San Diego for the U.S., offers an intriguing glimpse of California as its own land. Some threads remain to be gathered at the end, but if this is, as Fleischman says, the end of his California trilogy, they beg another story. Spirited and entertaining. (Fiction. 9-13)