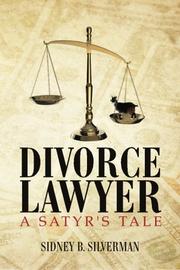 by Sidney B. Silverman

In Silverman’s (What Money Can Buy, 2011) novel, a lawyer faces disbarment after a woman files a sexual grievance against him.

Successful New York attorney Peter Morrissey practices divorce law. His clients are always women seeking lucrative settlements from their soon-to-be exes. As a self-confessed “satyr” (“the male counterpart of a nymphomaniac”), Morrissey routinely propositions his clients, even though the New York Bar Association’s professional standards prohibit such sexual relations, except where a relationship existed prior to the client’s retaining the attorney’s services. A woman named Molly Dixon alleges that Morrissey had sexual intercourse with her while she was his client (and that he billed her for the night). Now the lawyer must answer the charge in court and file a list of his female clients from the past five years, so he hires hard-driving criminal defense attorney William Duffy to represent him. But even as Morrissey faces professional censure and the loss of his livelihood, he still wants to bed his clients, as he finds all women attractive. Still, he hopes for leniency for his hypersexual appetites. The novel starts well with an amusing mix of dark comedy and chew-the-scenery dialogue, as when Duffy differentiates between women Morrissey “plowed” and the few he didn’t. Thankfully, Morrissey isn’t portrayed as a one-dimensional sleazebag; he’s likable despite his peccadilloes and admits that womanizing cost him his marriage. He even donates considerable time and money to Safe Horizon, an organization for victims of domestic violence. Every few pages, meanwhile, the hard-drinking Duffy comes up with another zinger; for example, when he snaps a photo of Morrissey on his cell phone, he says that he plans to hang it in the bathroom: “Every time I’m on the crapper, I’ll think of you.” The author shows considerable expertise in legal strategies and remedies; unfortunately, after the first few chapters, the book seems to be less a novel than a lengthy, point-by-point legal analysis. Legal professionals may be intrigued by this detailed accounting, but it may lack emotional resonance for others.

An initially engaging tale of an attorney behaving badly that ultimately instructs more than it entertains.