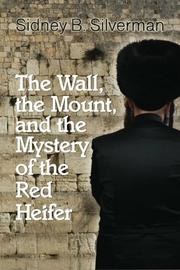 The Wall, The Mount, and the Mystery of the Red Heifer

by Sidney B. Silverman

A nearly unclassifiable work of fiction that combines invented memoirs, political essays, and legal briefs into a multifaceted vision of modern-day Israel.

Public discourse today revolving around Israel tends to fracture into hopelessly binary absolutes, valorizing or demonizing the nation. Silverman’s first book unfurls the tangled cultural yarn that makes Israel such a unique state, simultaneously progressive and atavistic. The work begins as a memoir of sorts, with Janet Levin, the primary but not only narrator, reflecting on her efforts to win women the right to pray at the religiously significant Western Wall in Jerusalem, a practice traditionally prohibited by the more theologically orthodox. Her activism is framed as secular in ambition, wrenching the reins of freedom away from a single religious class, but also spiritual insofar as the goal is to preserve the right of all Jews to pray equally, to participate in Jewish identity. The remainder of the book is loosely structured around this contentious issue, allowing both those for and against women at the Western Wall to speak reasonably and articulately for their respective sides. Levin’s feminist position is countered by the conservatism of Chaim Elan, the head of the Ministry of Religious Services, and Solomon Grossman, a lawyer for the Israeli Justice Department who represents traditionalist opponents. Others, like Rabbi Dov Batev, make a case, both political and religious, for equal access to the Western Wall. In a startling turn, Farhad Ghorbani, the head of the Iranian Intelligence Services, also gets a turn at fictional narration, exploring both his nation’s enmity for Israel and the surprising possibilities for détente. Levin’s breezy, conversational style and her commentary on her personal life add some helpful levity as a counterpoint to the book’s necessary gravity: “Hello again. A lot has happened since you heard from me. On the personal front, number two agreed to a divorce. He met a tschila and fell in love. Once he had a toy to play with, he agreed to release me. If I had only known that was the stumbling block, I’d have introduced him to dozens of tschilas.” In moments like this, author Silverman manages to combine daring artistic eclecticism with sober, political meditation.

A valuable, energetic book for anyone interested in moving beyond the narrowly constructed terms that often define debate about Israel.