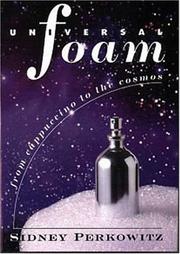 From Cappuccino to the Cosmos

An exploration of the science of foam that is also an engaging appreciation of its cultural uses—think of your beer’s head or cappuccino’s cap—from physicist Perkowitz (Empire of Light, 1996).

Foam is one of those peculiar and intriguing semi-states, not really liquid or gas or solid, but an arrangement of adjoining bubbles and cells of gas within a liquid or solid. Perkowitz takes readers on a Cook’s Tour through the substance’s extensive and quirky world, from ocean whitecaps to champagne, pumice, and bread—the foamy turmoil of quantum events. He works his thrall mostly in the cultural aspects of foam: how it effects the flavor of beer, the taste of bread; how it brought about an environmental crisis with its near indestructibility as exemplified by packing peanuts and Macdonald’s clamshell burger containers; the ethereal pleasures of meringues and soufflés and mousses; the aesthetic chords struck by paintings of churning waves from Hokusai to Homer. But when Perkowitz delves into the physics of foam, he gets bogged down. It may be that the mechanical and dynamic properties of foam are simply not compelling, but it does seem as though something as wondrous as sonoluminescence (the act by which bubbles change sound into light) ought to have readers gasping in awe. It doesn’t, here. More problematical is that Perkowitz at times comes perilously close to a tone of cooing condescension: “No doubt you’ll soon notice the remarkable diversity of matter that surrounds us.” At the end of the book, he does manage to make his science sing when he describes the cosmos as having the distinct qualities of foam as witnessed through the distribution of galaxies across space.

Curious about that froth on your cappuccino? Here’s the place to take its measure. But it is the reader who will have to provide the initial spark of interest, for though Perkowitz can be entertaining, he is not alluring.