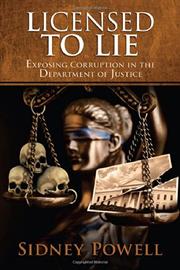 Exposing Corruption in the Department of Justice

A former Justice Department lawyer, who now devotes her private practice to federal appeals, dissects some of the most politically contentious prosecutions of the last 15 years.

Powell assembles a stunning argument for the old adage, “nothing succeeds like failure,” as she traces the careers of a group of prosecutors who were part of the Enron Task Force. The Supreme Court overturned their most dramatic court victories, and some were even accused of systematic prosecutorial misconduct. Yet former task force members such as Kathryn Ruemmler, Matthew Friedrich and Andrew Weissman continued to climb upward through the ranks and currently hold high positions in the Justice Department, FBI and even the White House. Powell took up the appeal of a Merrill Lynch employee who was convicted in one of the subsidiary Enron cases, fighting for six years to clear his name. The pattern of abuse she found was repeated in other cases brought by the task force. Prosecutors of the accounting firm Arthur Andersen pieced together parts of different statutes to concoct a crime and eliminated criminal intent from the jury instructions, which required the Supreme Court to reverse the Andersen conviction 9-0; the company was forcibly closed with the loss of 85,000 jobs. In the corruption trial of former Alaska Sen. Ted Stevens, a key witness was intimidated into presenting false testimony, and as in the Merrill Lynch case, the prosecutors concealed exculpatory evidence from the defense, a violation of due process under the Supreme court’s 1963 Brady v. Maryland decision. Stevens’ conviction, which led to a narrow loss in his 2008 re-election campaign and impacted the majority makeup of the Senate, seems to have been the straw that broke the camel's back; the presiding judge appointed a special prosecutor to investigate abuses. Confronted with the need to clean house as he came into office, writes Powell, Attorney General Eric Holder has yet to take action.

The author brings the case for judicial redress before the court of public opinion.