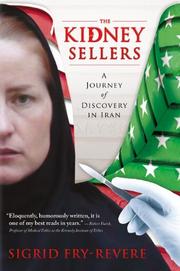 A Journey of Discovery in Iran

Fry-Revere (The Accountability of Bioethics Committees and Consultants, 1993), the founder of a nonprofit bioethics think tank, goes to Iran to study the effects of legalizing compensation for organ donors.

Many Westerners may be shocked to learn that, as untold thousands of Americans die while waiting to receive donated organs, Iran has so many people who want to sell their kidneys that they must get on a waiting list. Fry-Revere, the founder of the U.S.-based Center for Ethical Solutions, writes that “the United States is struggling with a problem Iran seems to have solved.” Her book aims to provide readers with “insights into the ethical complexities of living organ donation.” The book is partly a scholarly study of organ donation, partly a humorous personal history, and partly a poignant, in-depth look at Iran, following the author as she recounts her trip there and the emotional transformation she underwent. The author has impressive academic credentials, including teaching bioethics and law at the University of Virginia and George Mason University, but she’s also passionately connected to this book’s issue, which has affected her personally; her son lost a kidney to cancer at a young age. Her narration proves more than capable, as her intelligence and intriguing ethical sense bring her sentences to life. She also adds personal touches; in one paragraph, she describes U.S. State Department travel warnings regarding Iran, and in the next, she relates a nightmare she had, caused by these warnings. Throughout the book, however, kidney donation remains the central focus. She interviews Iranians who sold their kidneys so they could help their families while saving a life at the same time. The issue of economic injustice soon comes into play; Fry-Revere says that some people balk at the idea of selling human organs, believing that “the United States and other countries took a stand against exploiting the poor.” Her subject matter may be somewhat controversial, but her analysis is undeniably worth reading.

A compelling case for an unorthodox solution to a widespread health care problem.