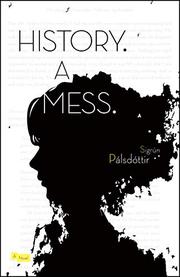 The excitement of breaking a major discovery about 17th-century art turns to terror when an academic rechecks her primary source material.

In a strange coincidence, the publication of Pálsdóttir’s U.S. debut comes close on the heels of a similar situation in real life, as Naomi Wolf’s misinterpretation of a key term in historical documents has led to her forthcoming book’s being delayed and possibly withdrawn. Though not much is straightforward in this difficult novel, translated from the Icelandic, it is clear that the narrator has screwed up big time. After six years of slogging along on her dissertation, she realizes in an epiphanic moment that the diary she's been studying belongs to what is surely Britain’s very first professional female artist. She’s on the brink of publication when she realizes two pages were stuck together, and the entry she failed to read disproves her theory. When she realizes what she's done—and what it means for her future—her tenuous grasp on sanity is loosened. “I no longer know if I’m watching or imagining what’s in front of me,” she writes. She begins to have hallucinations and terrifying daydreams, and these are mixed in with events of her real life in such a way that the reader is similarly hard-pressed to know which is which. We meet her parents (her mother is an important character, the person who knows the most about her project, to whom she planned to dedicate the published book), her lackluster dope of a husband, and her vibrant circle of female friends. We hear about various sad events in her past, including a miscarriage. The ending, though far from happy, is clever and a nice reward for making it through the book. Fans of the nouveau roman—Marguerite Duras, Alain Robbe-Grillet, Nathalie Sarraute, etc.—will be right at home here.

For people who like very complicated books that you have to read slowly and possibly twice.