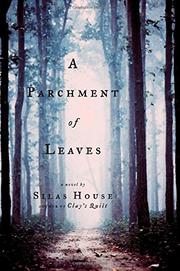 A PARCHMENT OF LEAVES

Breathtaking both for its beauty and its pain, House’s second (after Clay’s Quilt, 2001) tells a finely nuanced tale of a Kentucky mountain family in the tumultuous WWI era, as the taking of a Cherokee bride unleashes passions that create life and destroy it.

Vine seems a vision to young Saul when he first sees her as he and his brother Aaron ride by her house on horseback, but she quickly proves real, giving emergency treatment when Aaron is bitten by a copperhead. The feelings between Saul and Vine being mutual, their courtship is brief despite her mother’s misgivings, and she moves from all-Cherokee Redbud Camp to all-white God’s Creek, where Saul and Aaron live with their mother Esme. For a time all is well: the couple build their own house, Vine gives birth to daughter Birdie and becomes a beloved daughter to Esme. But work pressures increase for Saul, a logging foreman, as the clouds of war gather, and he must go away to distant mountains from which he can rarely get time off to travel home. In his absence, Aaron moves from brazenly staring at Vine to making an unwelcome advance. Rebuffed, he disappears, much to his doting mother’s dismay. When he returns a few months later with a pregnant bride of his own, however, Esme is not much relieved, as Aaron beats his wife, drinks, disappears for days at a time, and still lusts after Vine. His attempt to rape her in front of Birdie is the point of no return: Vine kills him in self-defense but keeps it a secret, watching in agony as Aaron’s “disappearance” eats away at Esme and at Aaron’s wife. Finally, she’ll see her secret come between her and Saul when the war ends and he returns home for good.

From the raptures of Appalachian Spring to the many, complicated facets of women’s lives in that time and place: a superb combination of wonder and suffering.